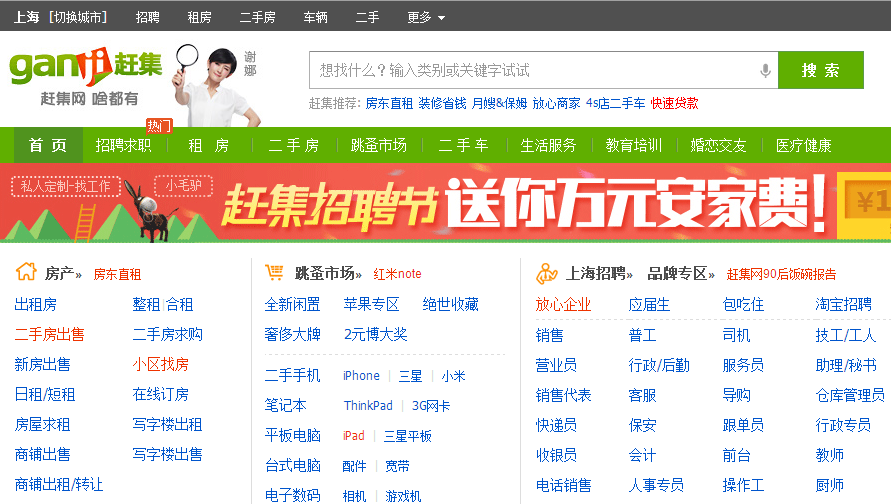 Chinese online classifieds service Ganji recently announced a new US$200 million financing round from U.S.-based Tiger Fund and The Carlyle Group. The company has raised nearly US$200 million of financing in previous five rounds since its establishment in 2005.

According to the company, the funds will be used in R&D, especially in mobile sector, O2O business, snapping up more market shares in local services, as well as strengthening marketing and channel management.

Different from previous conservative attitude towards IPO, Ganji, which lists various information ranging from job recruitment, housing and local services, also announced that it is preparing to go public in June next year.

Mark Yang, founder and CEO of the company, disclosed Ganji has recorded profits in 2013. He added the site’s annual revenue is expected to surge 150% in 2014 , while revenue from job recruitment service is expected to hit 700 million (around US$114 million) to 800 million yuan this year.

The company did not disclose detailed terms of the transaction, but Mark Yang emphasized that there’s no VAM deals involved.

As competition among Chinese Craigslist clones is heating up, 58.com, a direct competitor of Ganji, launched IPO on the U.S. market last year and pocketed US$736 million of funding this year in exchange of a 19.5% stake in the company.

It is reported that there are nearly 200 local listing sites in China during 2009 to 2012 and over 90% of these companies have failed in the three-year period. Ganji and 58.com are top two sites that stood out from the crowd. Baixing, a distant third in this industry following Ganji and 58.com, is targeting at smaller cities and mobile services in order to avoid direct competition with the two leading rivals.