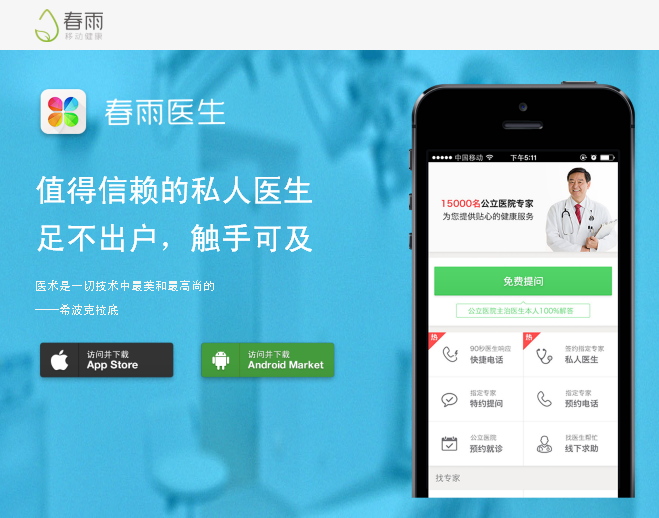 Medical and healthcare service battlefield is heating up in China with the fast approaching of aging society, more favorable policies from the government as well as the rise of Internet.

Chinese medical app developer Chunyu has closed a massive US$50 million Series C financing from CICC, Rushan Venture Capital under DunAn Group, Pavilion Capital run by Temasek, with participation of Series A and Series B investor BlueRun Ventures, which injected several millions of dollars in this round.

Founded in 2011 by Zhang Rui, former director at CCTV and chief editor of NetEase, Chunyu is a mobile healthcare service that connects patients and doctors. The company’s flagship app Chunyu Doctor allows users to make inquiries to professional doctors about their potential diseases and symptoms for free. The firm also tapped into baby-care sector with vertical B2C healthcare product Chunyu Pediatrician last year.

According to the company, Chunyu Doctor has amassed more than 30 million users and over 40K online doctors with daily inquiries reaching 50K.

Zhang Rui, CEO of Chunyu, said the new funding will be used to attract more users as well as doctors to join the platform. Calculated at current daily user growth speed, Chunyu Doctor expects to record 100 million users and 200K doctors by the end of next year.

Chunyu is now seeking to cooperate with hospitals, medical companies and pharmacies to commercialize the services, said Zhang. In addition, the company is exploring cooperation opportunities with wearables manufacturers, insurance and gene companies.

In the global market, healthcare services are also chased by VCs in the past one year period. The U.S. startup ZocDoc raised US$152 million, Flatiron Health received US$130 million funding, and CastLight secured US$100 million.