Last year’s personal direct investment included 3,984 people and KRW 174.7 billion (based on income deductions) which marked the highest in both the number of investors and amount since 2004, the year the venture bubble burst and the number of private direct investors fell sharply.

Considering that the application for income tax deduction for investments made in 2016 applies until 2019, the actual number is estimated to be even larger.Private investment has shown a remarkable increase since 2010, especially in the last three years (2014-16). The average annual growth rate was 41.2%.

Among the various factors that facilitated angel investment, the most effective seemed to be the government’s policy that aimed to rejuvenate the startup ecosystem and minimize the risk of angel investment.

This article, entitled “South Korea sees spike in angel investment with over USD 1.75 billion”, was written in Korean by Saerom Jeong of Platum, edited by AllTechAsia. 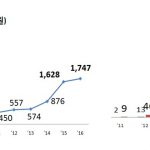