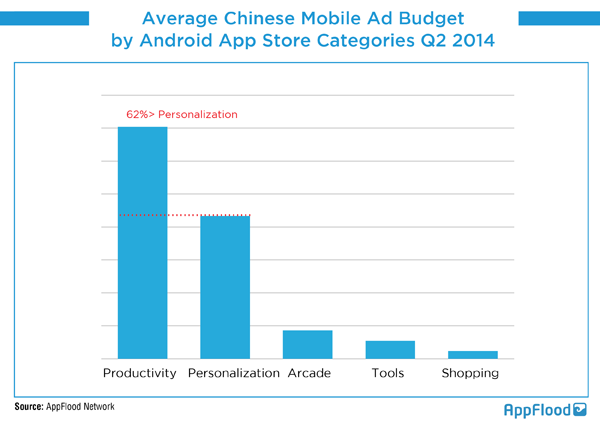 AppFlood, a global mobile advertising service with roots in China, found the biggest Chinese mobile ad spenders with it in Q2 2014, AppFlood found, are developers with “productivity apps” . As most Chinese advertisers that work with AppFlood are for mobile users outside China, it’s safe to say those productivity apps are of the most active Chinese apps in overseas markets.

It’s not surprising to people who know one thing or two about China’s tech landscape. As I wrote before, many Chinese developers see apps such as Android launcher and lock screen replacement app as entry-point apps which control access to smartphone-based mobile content. Those Chinese apps have been buying users in markets they have no knowledge in, hoping to monetize them later by placing ads and a search box on the smartphone home screen, or sharing revenues from apps they help promote.

Other productivity apps that are actively acquiring overseas users include battery saver, keyboard, among others. Cheetah, the Chinese mobile service developer, is one of the biggest advertisers to more than a few overseas marketing services. With the money spend, 63% of its active users were from outside China as of June 2014, mostly from the U.S. and Europe.

Other big spenders, as I know, also include anti-virus apps (Qihoo’s and Cheetah’s), mobile messaging apps (like WeChat), and games.

Thanks to ad spenders, another group of mobile services are also active in overseas markets that include mobile marketing services like AppFlood. This trend has attracted many foreign services. ironSource from Israel and SweetLabs, a Google Ventures and Intel Capital-backed app distributor, have set up offices in China.

Services like ironSource and SweetLabs who started from PC-based application distribution have found new business opportunities in China besides mobile add marketing. Some categories of apps have begun acquiring PC users with them. As we discussed before, some proven PC-based business models may not migrate successfully to mobile. It’d be interesting to see whether some Chinese business models like Qihoo’s — gaining users through free anti-virus software and monetizing them through advertising and paid third-party services — can work out in other countries.

AppFlood saw China’s mobile ad budget grew 183% between Q1 and Q2 2014. The ad spend from Chinese advertisers increased 123% year-over-year, much higher than that from their US counterparts in the same quarter.

SweetLabs also find their Chinese clients are more aggressive than their Western counterparts in terms of global expansion, especially in merging markets. Those Chinese “believe the success of their playbooks can extend into these markets quite effectively”, said Joe Lin, Head of China operations at SweetLabs. 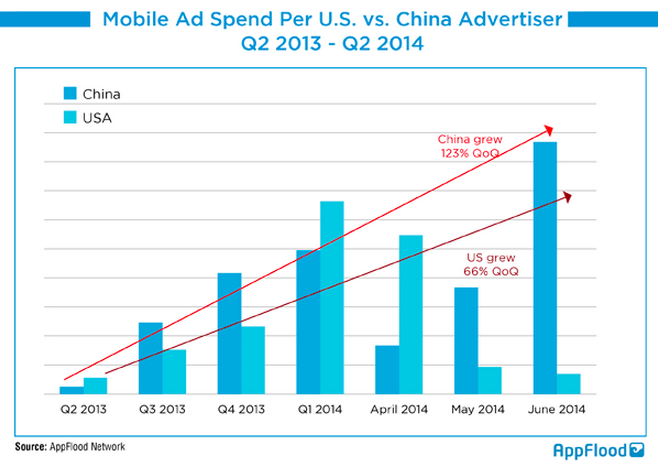