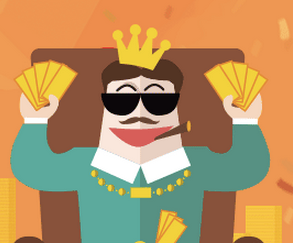 At the end of 2012, Chinese Ministry of Finance (MOF) issued a regulation that officially allows for selling lottery tickets online. So far no private companies or organizations, no matter their businesses are operated online or offline, are allowed to design and issue lottery tickets in China.

Only two websites, the lottery site of the state-owned China Sports Lottery Administration Center and the parent company of 500.com (formerly 500wan.com which went public on the NYSE earlier this year) have been authorized by MOF to sell lottery tickets online.

Almost all big Chinese Internet companies, including Baidu, Tencent, Alibaba, Qihoo 360, Netease and Sina, and many startups have entered the market, establishing sites to sell lottery tickets or acquiring/investing in some of these sites. But most sites have to work with the two authorized that should at least pay the latter commissions for enabling users to buy lottery tickets directly on sites of the former.

It is estimated that in China lottery ticket distributors receive up to 15% of the total sales. Given the online operation costs and the commissions paid to the two authorized sites, the online distributors get way lower a revenue share, an estimated 5% – 7% of the total sales, according to TOMsInsight, a Chinese research firm that has recently released a series of reports on China’s online black market.

So far it doesn’t sound like a good business for most of the Chinese online lottery tickets sellers. But the fact is even before the issuance of the regulation there had been lottery tickets available to buy on Taobao, the customer-to-customer marketplace of Alibaba Group, or many other websites. It seems for them it’s very good a business. Here are some ways in which some lottery tickets sites make big money,

1. Pocketing the money users pay for lottery ticket purchases instead of buying lotteries from the authorized sites for them. To site owners who keep doing so, the chances of winning lotteries are small and the total winning amount must be lower than the total money paid by users in a certain period of time.

Thanks to the advanced computing technologies, online lottery draws are able to take place every several minutes. Lottery products taking advantage of that account for 80% of the traffic on all the online lottery sites in China, according to TOMsInsight. It’s harder for users to get suspicious of these sites for the draws pass so fast. TOMsInsigt estimates that 60% of the lottery market in China is of this category.

Some sites hire people to sell more tickets they’d not buy at all and share income with them. Of course, some people that have found out the secret would set up sites to sell the “invisible” tickets on their own.

2. Running away after a big lottery win. In this case the site owner(s) do purchase tickets for users.