It seems Wish can bring Chinese online retailers selling made-in-China goods overseas to the next level.

Wish is a mobile shopping app that shows personalized items based on wishlists used have created or shared. It provides analytics reports including sales forecasts to businesses who list goods on it. Wish takes a 15% commission. It also takes care of returns.

Founded in 2010, Wish claimed it had had 31 million active users worldwide when it announced 50 million financing round less than two months ago. That brought the total amount of funding the company raised to US$80 million.

GGV Capital, a US-based venture capital firm with strong root in China, joined two rounds of funding in Wish. A couple of other investors, including Jerry Yang and Legend Capital (under Lenovo), are also with Chinese background. Apart from the technologies with Wish, one factor that attracts those investors must be the fact that most businesses on Wish are, and will be, Chinese online retailers.

Hans Tung, managing partner at GGV Capital, reckons cross-border e-commerce is one of the three categories of Chinese tech businesses that will have opportunities to expand overseas — The other two are virtual good and mobile tool. There have been a couple of successful Chinese models in selling made-in-China goods overseas online.

LightInTheBox, a Chinese cross-border retailer that went public in the US last year, receives over 90% orders and revenues from outside China. It is believed the company has fully leveraged search marketing and SEO — Its current CEO Alan Guo used to be senior exec at Google China before joining the company. The company reported US$292 million in revenue in 2013, a 46% increase, with US$4.8 million in net loss.

AliExpress, the international marketplace of Alibaba, decided to shift focus from wholesale to retail as they found increasingly more orders from individuals instead of small wholesellers whom the platform was originally targeted at. It has been trying to channel the existing retailers on Taobao, the retail marketplace a majority of Chinese online shoppers make purchases on, to sell the same goods to overseas customers on AliExpress. To meet the demand by the changed audiences, the platform expanded categories of goods from electronics to apparel and home furnishings. Also, the target market was changed from the U.S. to the less developed, Russia, India, Brazil and Eastern Europe. AliExpress charges a 5% commission.

A large number of Chinese online retailers have been on eBay too — They may also have presence on AliExpress or, more recently, Wish. Wish wishes to have those on existing platforms to get on its app and benefit from its advanced tech solution.

Mr. Tung thinks cross-border e-commerce can be a big business but existing Chinese teams need more understanding in overseas markets or to hire more local talent. Wish is based in the US and now has set up an office in Shanghai, China. 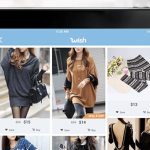