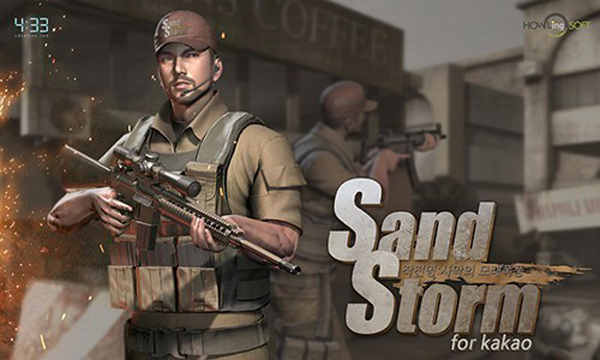 Here is a quick overview of how the South Korean apps performed this week.

While some of the top ranked apps continued its popularity from last week (i.e. KakaoTalk, Facebook Messenger, and other game apps), there are some new games that have newly risen to the top 5.

Released on September 2nd, Sand Storm is a mobile military, counter-terrorism FPS (First Person Shooter) game on Kakao developed by 4:33. Players can now experience same level of thrill and excitement that their PC online FPS games offer on mobile devices. Just like most online FPS games, players can also choose to play against another player. It has recorded over 100,000 pre-download orders even before launch.

KakaoTalk is the number one mobile messenger in Korea with over 100 million downloads since its 2010 release.

Messenger has now been made required for Facebook chat on mobile devices. Since release in 2011, it has recorded over 500 million downloads.

Reversed! Table Tennis continues to be one of the week’s top 5 from last week, but fell down from number two to four this week.

Released on September 5th, Story of Wartime Heroes is a “card-action” battle RPG (Role Playing Game) developed by Ghost Games. Set in a fictional Oriental world, the game is a combination of high fantasy action and card collection. Players set out to defeat an evil “Ma-jok” force by unlocking heroes (in cards) to strengthen their team of warriors.

KittenTaxi was released on August 19th. Players help bank robber kittens race away from chasing police cars. Players drive the taxi with swipe controls, dodging bombs and picking up weapons to shoot back at the cops. Despite the violent storyline, the game has a rather benign look, much reminding of a children’s cartoon. Animated figures look as if drawn by colored pencils, making it easier on the eye.

The Tower continued its popularity from the previous week but fell one rank below.

Released by LINE Corporation, this easy-to-use camera app offers more than 43 filters to edit photos and helps to “find your true self within the shining contours and multifaceted harmonies.” Users can also take collage-shots to stitch together multiple selfies as a single picture, and share it on social media.

Released on September 4, Angry Birds Stella is a spinoff of the original Angry Birds. The Stella version features a new archenemy, the Bad Princess, who tries to take over the Golden Island with her Clueless Piggies.