App Annie, the mobile App Intelligence Platform released a ‘Consumer Apps Usage In-depth Report’ which analyzed mobile app usage in the first quarter of 2017. In comparison of how many hours Android users spent on mobile apps in the first quarter of 2017, the average daily usage time of Korean users was about 200 minutes, which marks the highest followed by Brazil, Mexico and Japan. 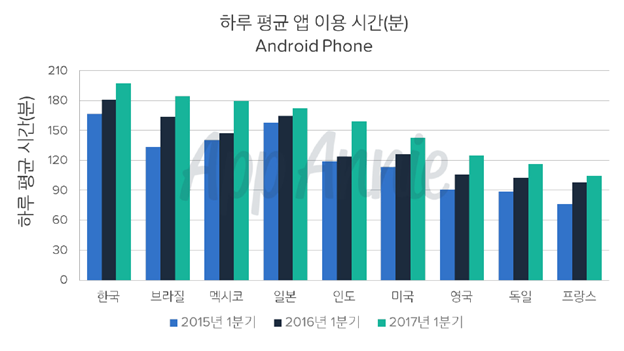 Users in Brazil and Mexico spend more than 50% of their time on the social and communication category, while 25% of Korean users spend on the game category. 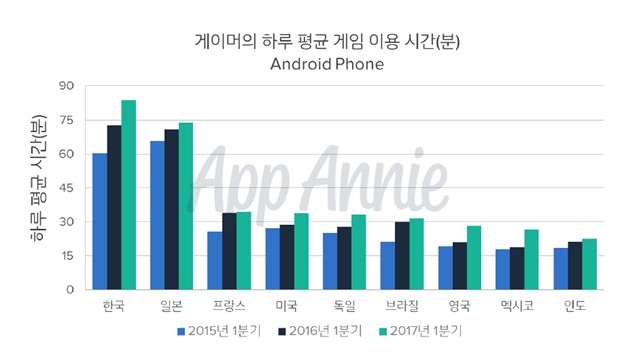 App Annie reported that smartphone users in all countries covered by this analysis use more than 30 mobile apps each month, an average of 30-50% of installed apps. In many industries, mobile apps are viewed as essential to business, and most users are using mobile apps in their daily lives.

Users in the countries surveyed are reported to use at least nine apps a day, and it is found that iOS users use slightly more mobile apps per day than Android users.

On average, Android users are using 30% more game apps than iOS users. However, in terms of revenue from the apps per user, iOS users out-ranked Android users in the game category.

Globally, apps in data and productivity category are run about four times a day on average, while financial and productivity apps run less than a minute each time they run. App Annie suggested that it is important to analyze the reason and point of view of each mobile app as it is so different from the run count and usage time of each category through the report and reflect the result in the mobile app strategy or mobile app composition.

Lee Sang-Jae, Director of App Annie Korea, said, “in 2016, mobile app usage time was one trillion hours. From looking at the data of January 2017, the same trend is expected to continue in 2017 as well. The key to mobile apps’ survival is to have a way to incentivize users to continue using their apps.” 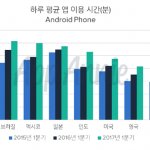