Global Entrepreneurship Monitor – 2016 China Report, published last December by Tsinghua University National Center for Entrepreneurship Research, reported that the average budget of Chinese startup founders to establish a company is ¥113,000 CNY ($16,508 USD). The report contains comprehensive information about entrepreneurship ecosystem of China within the G20 including the key characteristics of the market, startup ecosystem and policies, and investment sizes.

The GEM China report suggests that China’s entrepreneurial activities were relatively active compared to that of other countries in the G20. The Early Entrepreneurship Activity Index (the ratio of 18-64 year old entrepreneurs to the population) was 12.84% for China, 11.88% for the US, 6.93% for the United Kingdom , 4.7% for Germany and 3.83% for Japan. The majority of the entrepreneurial activity in China is young founders, who represent 41.67% of total founders. Additionally, the initial funding of a startup was reported lower in China (¥113,000 CNY) than in the U.S. (¥122,000 CNY).

Currently, the most active entrepreneurial sector in China is customer service (B2C), and there are relatively fewer startups in high-value-added industries. While China’s customer service sector accounted for 69.69% of the total ecosystem, the high-value-added service sector (information technology, telecommunications, financial and professional services) accounted for only 8.2%. On the other hand, 35.49% of the UK, 32.79% of the US, 31.42% of France, and 26.89% of Germany were high-value-added entrepreneurship – showing much higher ratio than China.

Average rounds of funding were found to be lower in Korea but showed high level of positive assessment on government’s startup policies. The KSEF report noted that “the South Korean government’s active role in creating startup-friendly policies in collaboration with accelerators, investors, and government agencies as well as media have contributed positively to the expansion of Korean startup ecosystem.”

According to KSEF report, the most funded sectors for each financing stages in Korea are food (Seed/Angel), real-estate (Pre-Series A), mix of Advertisements, Games, and Travel (Series A), food and lifestyle (Series B), and mix of fintech, advertisements, commerce, and entertainment startups (Series C). Additionally, the number of early-stage startups funded have increased significantly since 2014.

The GEM China report points out that high ratio of self-funded startups may be due to most of Chinese founders targeting only the domestic market. Startups with more than 25% of customers in overseas accounted for only 5.46% of all startups in China. Meanwhile, Canada and Germany showed higher ratio with 27.93% and 25.13% respectively. Finally, the report assessed that the Chinese entrepreneurship ecosystem is well-equipped overall, but suggested improvements in business environment and education.

Similarly for Korea, “increased diversity must be established through global expansion and inclusion of investment towards women and international members.” in order to maintain the current momentum of positive growth in the entrepreneurship ecosystem. 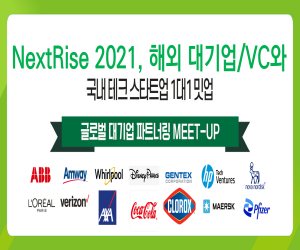 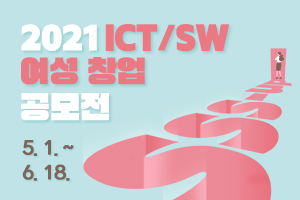 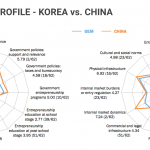