Seoul-based startup Lineable accomplished on Jan 21 a rare success in securing funds through Wadiz, a domestic crowdfunding platform. With the help of more than 1,500 investors, Lineable, which specializes in production of a smart wristband that aims to prevent missing children by notifying parents of their children’s whereabouts, briskly passed the 20 million won (roughly $20K) threshold to finance its business.

In this sense, Lineable’s success via Wadiz can be considered a milestone that will inspire many other startups with creative ideas to be more confident that they can also successfully raise funds through domestic crowdfunding platform. 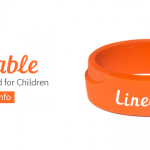